The human immunodeficiency virus... is one of the fastest evolving entities known.2

HIV shows stronger positive selection [having more beneficial mutations] than any other organism studied so far.3

Since first entering humans about 100 years ago, HIV has had more mutations and more replications than (for example) the fewer than 1020 mammals that would've ever lived during a 200 million year evolutionary timeline.23 24  Even though natural selection is much stronger in an RNA virus like HIV than in large genome mammals,3a 21 22  HIV has evolved very little terms of new or modified function.  This strongly suggests evolution would not have enough opportunity to create the the vast and largely different information in the genomes of all mammals, where there was less opportunity for evolution to act.

During the 100 years of HIV evolution there's been:

The rest of this article quantizes HIV population sizes, mutations, and useful evolution.

HIV is a modified form of SIV that infects humans, found in two main types:

HIV-1 "is most closely related to SIVcpz,"5 the form of SIV found in some chimpanzees.  HIV-1 is categorized into "groups M, N and O which represent separate transfers from chimpanzees,"3 although "one or two of those transmissions may have been via gorillas."5

HIV-2 is "most closely related to SIVsm"3 found in sooty mangabey monkeys,  HIV-2 is believed to have been transferred from these monkeys to humans "at least four"3 times.

HIV-1 group M (for major) accounts for the "vast majority (perhaps 98%) of HIV infections worldwide"5 while all other HIV types are mostly or entirely restricted to West Africa.3 Molecular clocks suggest that HIV1 group M first originated "around the 1920s"5 and the other groups don't "appear older than HIV-1 group M."5

Various studies estimate that about 1010 to 1012 HIV viruses exist in an infected person: 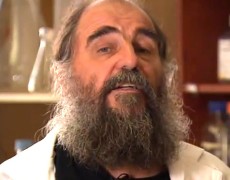 In 2007, Ian Musgrave (geneticist, anti-ID, pictured) and Michael Behe (biochemist, pro-ID) debated in a series of back and forth blog posts about the HIV population size and how much it had evolved (the same topic as this article):

Rather than by counting and extrapolating, some studies (not included above) measure HIV genetic diversity, and use that to estimate effective population sizes in the range of 450 to 105 HIV virions per person.12 These estimates "are many orders of magnitude lower than the census size--a result that has surprised and perplexed many in the HIV-1 community."11

Why would HIV have low genetic diversity? Because in each HIV infection, the HIV starts as only a small number of virus particles and then expands to nearly a trillion viruses. And rapidly expanding populations have lower genetic diversity.  HIV is also subject to strong selection, and selection removes variants from a population.

Therefore since the effective population size is misleading, and since observation trumps such models, the observed population size estimates in the table above are more reliable.

Sadly there are "an estimated 42 million people carrying the [HIV] virus at present."3 Multiplied by 1011 HIV virions per person gives 4x1018 HIV virions existing at any given time.

However, only one in 100 or fewer virions go on to infect other cells: "perhaps 1011 virions are produced daily,"7 although "the number of cells infected in the same time span... is unlikely to exceed 109 "7

HIV has "about 2×10-5 mutations per site per replication cycle."13 An earlier study "reported a much higher mutation rate," but it "focused on integrated provirus and might not reflect the mutational frequency in the circulating HIV-1 virions."13  The HIV-1 genome is 9181 nucleotides, so that works out to:

This means that during the last 100 years, a point mutation has occurred at every single letter of HIV's 9181 nucleotide genome about 1.1x1018 times (1022 / 9181).  If we account for point mutations changing nucleotides to one of three other letters, every nucleotide of HIV's genome has been tried out 3.7x1017 times (1.1x1018 / 3), and every possible combination of two nucleotide mutations has been tried about 6.1x108 times (previous number divided by 9191*3).

For humans, the numbers are similarly large.  We have a 3 billion nucleotide haploid genome and about 33 mutations per haploid genome per generation.  Thus it would take about 273 million human reproductions to test every possible single nucleotide mutation, and 2x1026 human reproductions to try every possible combination of two mutations.  The table below extrapolates further for combinations of 3, 4, and 5 mutations:

In other words, it would take about 6.9x1040 E. coli to try out every possible combination of 4 specific mutations in its genome.  This is more than the total of 1040 cellular organisms estimated to have existed on a 4-billion year old Earth.23 24  Yet in the last 100 years, HIV has tried out every possible combinations of 4 mutations in its own (much smaller) genome.  And has done so about 17,301 times.

The annotated3 chart below shows all strains of HIV circulating within humans (red lines) and their inferred origins from monkey and ape SIV (gray lines). Longer vertical lines indicate more fixed mutations.  Blue numbers indicate the total number of mutations fixed during the time represented by the red vertical lines.  The sum of all blue numbers indicates that about 5,160 mutations have become fixed among the various HIV subtypes since first entering humans.

Confounding these estimates, most evolution occurs within a single host and is then lost:  "HIV evolves extremely rapidly within individuals, viral evolution is somewhat slower on a population level,"4  Although there's still "extensive viral diversity both within and between hosts,"4

Likewise if we wanted to compare the number of mutations separating humans and mice, we would compare the average human genome to the average mouse genome, but we wouldn't include the billions of unique mutations present in small numbers within both human and mouse populations.

The chart above omits HIV-1 group M subtypes H through K, which would increase the number of fixed mutations beyond 5,160.  However, even though HIV shows "stronger positive selection than any other organism studied so far,"3 and most mutations with HIV's ENV gene "confer a selective advantage,"3 (HIV has about 10 genes) it's unlikely that all 5,160 mutations are positively selected and constructive.  So we will use the upper-bound estimate:

Since first entering humans in the 1920s, about 5,000 or fewer constructive mutations became fixed among the various HIV subtypes.

Tetherin is a protein used inside mammal cells to build tethers "between virus envelopes and the cytoplasmic membrane of the cell, preventing the release of those viruses."5

Some strains of SIV have a Vpu gene that produces a protein that counteracts tetherin.  For example "Vpu protein of SIVgsn has been shown to counteract greater spot-nosed monkey tetherin."5 But the strain of SIV that infects chimpanzees uses Vpu only for "anti-CD4 activity"5 and does not use Vpu against tetherin.  CD4 is a protein on cell surfaces that SIV and HIV use to enter T-cells.

During the process of entering humans, HIV-1 groups M and N both and separately reactivated Vpu's anti-tetherin ability: "the vpu gene did not diverge to the extent that the activity could not be rescued."5 "When SIVcpz crossed the species barrier to infect humans... Vpu subsequently (re)gained its tetherin-antagonizing function."15  Through this evolution, "HIV-1 group N Vpu has lost [its] anti-CD4 activity,"5 although this ability was retained in HIV-1 group M.

However "it is likely that SIV jumped into humans many times"5 before it led to the modern AIDS epidemic.  Since these species-crossing attempts occurred perhaps far into the remote past, it's not possible to estimate how many viral replications occurred before SIV was able to discover these mutations.

The differences in the Vpu protein in HIV/SIV in various species.16 Each letter represents an amino acid. "Hydrophobic TM [transmembrane] domain", "α-helix", and "β-turn" are different regions of the protein.

Is the evolution of HIV's Anti-tetherin activity Irreducibly Complex?

Some evolutionists point to HIV-1's anti-tetherin activity as proof that evolution can create features that require a large number of simultaneous mutations in many organisms.  This is a non-sequitur for two reasons.  First, as noted above, HIV has had the mutational resources to explore most possible combinations of five mutations.  Exploration this vast can only happen in RNA viruses like HIV, since they have huge populations, very small genomes, and very high mutation rates.  Larger and more complex organisms would never be able to explore that many combinations even if given trillions of years.  Irreducible complexity (as defined by its originator, Michael Behe25) is a function of population size--larger populations can overcome more simultaneous mutations.

Second, HIV-1's anti-tetherin ability seems as if it was acquired gradually one improving mutation at a time, rather than occurring through multiple simultaneous mutations.

In order for HIV 1 group M's Vpu gene to counteract tetherin, at least three amino acids are needed in the Vpu's transmembrane region:  "three amino acid positions, A14, W22, and, to a lesser extent, A18, are required for tetherin antagonism."17  Another research group reached similar conclusions by splicing that and an adjacent region into a Vpu gene from chimpanzee SIV:  "SIVcpz Vpu was able to completely rescue the tetherin restriction phenotype when it encoded both regions 1-8 and 14-22 from HIV-1."1818  The researchers saw that "chimeras within each region yielded intermediate phenotypes, suggesting that these regions harbored several minor determinants."1818

We can calculate the mutational path for those three amino acids to mutate to get anti-tetherin activity in HIV-1 group M.  The diagram above (under Hydrophobic TM domain) shows that HIV-1 group M's Vpu protein differs from the SIV's at amino acid positions 14 and 18.  The W at position 22 was already present in chimpanzee SIVcpzPtt, the groups that most closely resemble human HIV-1 groups M and N.  The necessary mutations:

Unfortunately, I haven't found conclusive data on whether the evolution of anti-tetherin activity in HIV-1 group N is or isn't gradual.  A 2012 study found that "four TMD amino acid substitutions (E15A, V19A, I25L and V26L) were sufficient to render the SIVcpz Vpu active against human tetherin."28  Figure 5A in their paper (reproduced below) shows human HIV-1 group N in yellow, SIV in blue, and how the researches mixed and matched the amino acids to get different results:

Unfortunately the researchers didn't test position 15 by itself, 25 and 26 separately, or 16-18 separately, so we don't know if doing so grants stepwise gains.

Each row is a list of amino acids in part of the VPU protein from a strain of HIV, SIV, or an artificially created hybrid.  Yellow sequences are from human HIV-1 group N, blue from Chimpanzee SIV.  Under the Tetherin Release column, - indicates no activity, (+) is low activity, + is moderate activity, and ++ is high activity.

The human leukocyte antigen system is a set of genes that creates proteins on cell surfaces to present viral proteins to white blood cells.  A 2011 study looked at HIV evolution within a Chinese sub-population over a course of 10 years.  Among RNA letter variations seen in the HIV gag, reverse transcriptase, integrase, and nef genes, finding "24%-56% were sites of HLA-associated selection."26  In simple terms, these mutations helped HIV survive, likely by changing the structure of HIV proteins enough that they were no longer recognized by the immune system.27a

However, some of these mutations end up harming HIV in other ways, and those often revert when infecting a new host with a different immune system:

The long-term stability of T-cell escape mutants depends on the fitness cost incurred by the virus; variants with a high-fitness cost tend to revert to the original sequence after transmission to a host without the selecting HLA allele, unless an appropriate compensatory mutation is also present.  Other variants revert only slowly, if at all...26

This section is incomplete, although there are many other gains that could be documented here.